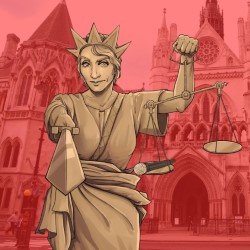 Just the Tonic @ The Charteris Centre

Rolling wears her political and social heart on her sleeve from the outset, and her audience tonight is on her side

You would perhaps be forgiven for thinking that there aren’t many laughs to be gleaned from a detailed examination of the UK’s criminal justice system. Abigail Rolling will quickly prove you wrong.

Rolling is an actual practising lawyer (a solicitor, to be precise). Whether or not she is a shit one is left to our judgement, but it’s not really the point of the show. Rolling guides us through the increasingly preposterous real cases that she’s worked. We’re introduced to several of her more colourful clients, from a minor repeat offender to a hapless serial shoplifter, both of whose story highlights the way the justice system can really fail some people.

Rolling wears her political and social heart on her sleeve from the outset. She genuinely cares about her clients, and about the judicial machine as a whole. Her audience tonight is on her side, and in often vocal agreement with her tirades against government defunding, illogical legislation, and certain aspects of the police. A lot of her specific examples concern the law in England and Wales, which makes for the occasional awkward moment when Rolling starts to discuss the situation in ‘Britain’ and then has to clarify when she remembers where she’s performing.

The Sub-Atomic at Just The Tonic is a great room in many ways, but sadly not acoustically. Rolling’s amplification muffles her voice as much as it amplifies it, and in a few of the quieter moments we actually struggle to make out her words. She hits the important jokes perfectly, though. The first big laugh comes at about the ten minute mark, with a lovely topper to a fairly standard gag which catches the audience totally off guard. It results in a wave of seat-shaking collective laughter, and Rolling visibly relaxes as soon as it hits.

Her delivery is mostly quite muted and conversational. It helps enormously with establishing her character and the character of the various clients she introduces, but it occasionally takes from the impact of some jokes. She understands comic rhythm, and frequently slows her delivery to ensure that her punchline is given as much space as it needs. Combined with her skill as a joke crafter, it makes for a good hour of comedy, with a sociopolitical message which, much like a great lawyer, is hard to argue against.