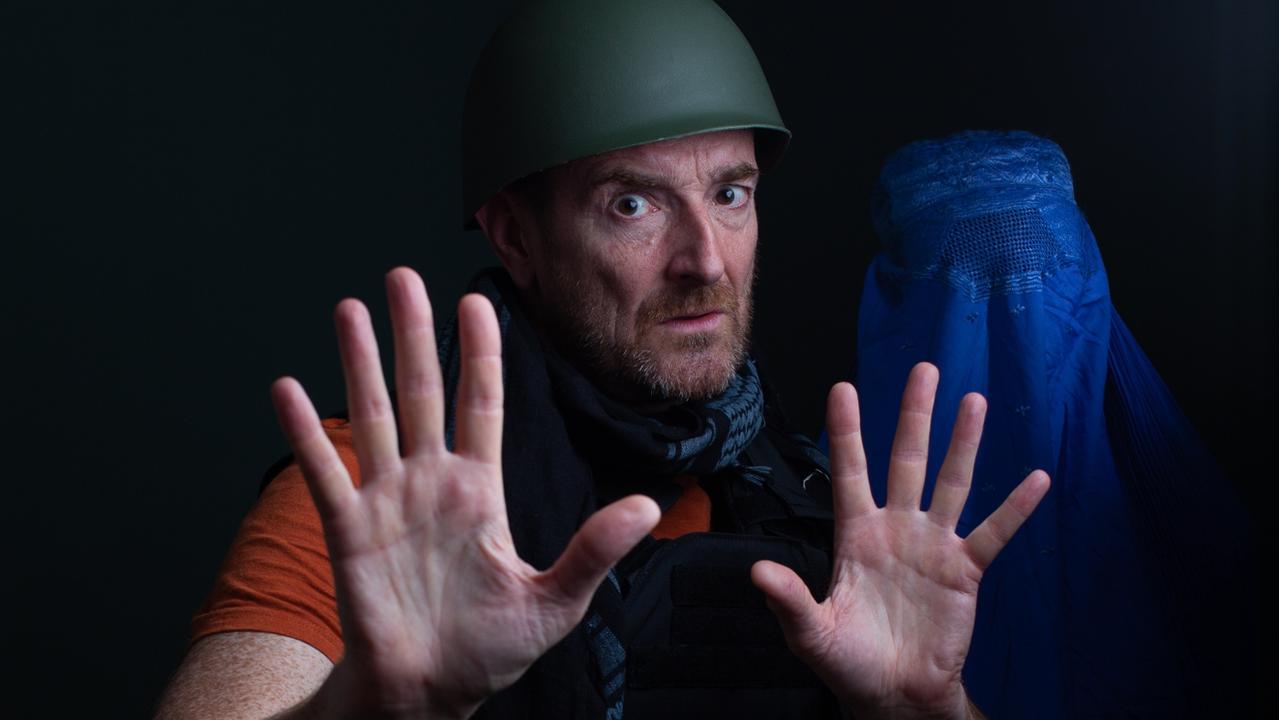 Afghanistan Is Not Funny by Henry Naylor

Its finale will leave you thinking

Multi-award-winning UK playwright, Henry Naylor, has done it again with Afghanistan Is Not Funny, an insightful, heart-wrenching play which deals with challenging subjects and the search for truth.

Written by Naylor he also stars as its solo performer, aptly characterising the other people in his play, with a change of voice, accent (a Brummie therapist, for example) and intonation. It’s beguiling in its humour.

A simple studio set comprises two tables with tablecloths spray-painted with ‘Afghanistan Is Not Funny’ and chairs. There are no other props apart from a white screen onto which photographs by Sam Maynard are projected to explain the story as it unfolds. The initial projection is a young-looking, cleanly shaven Naylor. The projections are as integral to the play as Naylor’s storytelling and eye for detail.

Naylor delivers the lines with the consummate timing of an ex-stand-up comedian and while Afghanistan is not funny, there are still comedic elements within the play.

The story begins some 20 years ago in 2002 and focuses on a trip Naylor takes to visit Kabul, along with risk-taking photographer friend Sam Maynard, to validate and fact-check a comedy project he has written, called Finding Bin Laden, which ultimately becomes a hit show, but perhaps not the film he had hoped for starring Hugh Grant and directed by Stephen Frears.

Aided by their guide and fixer, Houmein, who in reality is a surgeon paid $20 a month and who has taken on this task to supplement his income so he can feed his family, we’re led on an extraordinary journey of the scrapes and situations they find themselves in.

The photographs seek to validate the horrors and fallacies of war. Their research is not without risks and Naylor’s descriptions are enlightening, horrific yet funny in his delivery.

We see a projection of a concertinaed building still home to displaced people; a grand building displaying a huge gaping hole and blood-stained walls when the planting of a landmine resulted not in the death of any tourists it was meant for, but for the bomber himself; a harrowing image of a polio-ridden child on an operating table, surrounded by his distraught parents and surgeons, before his legs were to be amputated; and the ruined remains of a marble factory, the only employment in the area, bombed by the Americans who claimed it was Bin Laden’s nuclear factory.

The most enthralling moment of the play, backed up by Maynard’s photos is their encounter to find the tank graveyard, a vast area of the desert filled with disused tanks. It leaves them coming face to face with 12 soldiers sporting AK47s and the local warlord, ‘the most impressive man Naylor has ever seen.’ What could have resulted in a near-death experience ends up with seven soldiers restaging the liberation of Kabul, sitting atop a tank, ‘while Sam has started to direct them to punch the air’ for the dramatic effects of the photograph.

This play packs a punch, not least with the final image portrayed onto the screen, an image much like the Napalm Girl, whose haunting eyes will stay with you long after you leave the theatre.  Its finale will move you to tears.   It reasserts the fact that Afghanistan is really Not Funny.