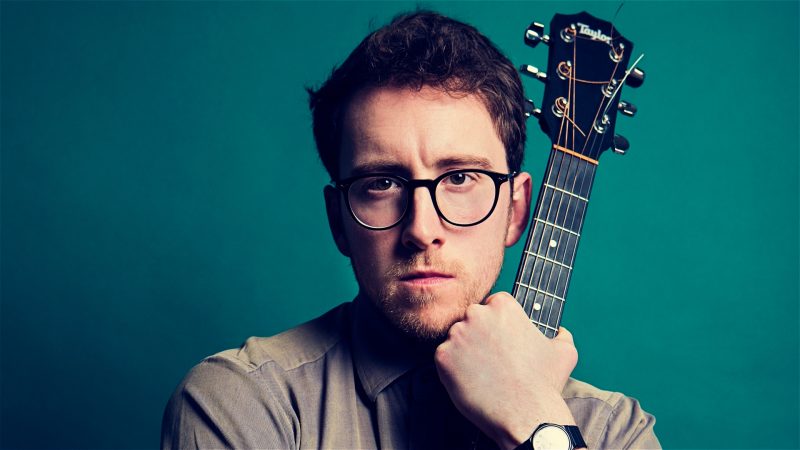 Alex MacKeith
Thanks for Listening

Unassuming musical comedian lets his hilarious songs do the talking

Most other acts... aren't turning lock down trauma into a multi-movement, acoustic prog epic about spending a year stuck in a house with your dad.

Like many acts this year, Alex MacKeith is getting the Pandemic out of his system early before getting into the meat of his show. Most other acts, however, aren’t turning lock down trauma into a multi-movement, acoustic prog epic about spending a year stuck in a house with your dad.

If that sounds like so-much naval gazing, think again. The affable Welshman’s songs are sophisticated in structure, drizzled with self-deprecation, and loaded with all kinds of serpentine narrative twists and unpredictable gags. Although his switch to musical comedy has come recently – he was formerly part of the sketch trio Princes of Main – he’s taken to it like… well, as he might well put it himself, a white middle-class man to an acoustic guitar.

The songs cover a wide variety of off-kilter topics. Highlights include a surprise birthday party that goes very wrong indeed, a rousing sing-a-long about drinking from the Thames as an aid to weight loss, and demanding a horse from his bank after seeing it featured in an advert. There are a few shorter, snappier numbers here and there, and even though they feel like relative filler, they still contain sharp wordplay and a punchline crashing in from left field.

In between MacKeith confides in the audience about being diagnosed with anxiety, from which his songs are a refuge, and the guitar something of a buffer while performing. Not that there’s anything self-pitying. In fact some of his anecdotes get increasingly weird, and he admits later that he’s enjoying leaving people to figure out which are genuine, and which are hyperbolic stage banter. He comes across as a relaxed and confident performer, clearly at ease in his latest incarnation, and there’s no denying the rapport he has with the audience. Yet, for the most part he wisely lets those excellent songs do the talking.

Musical comedy is a difficult medium to get right, but MacKeith has achieved this admirably in his debut. Most impressively given the wildly disparate nature of his songs, he manages to tie it all together in a beautifully uplifting finale, with various callbacks to earlier tunes studded through a repeated refrain to, ‘Be brave’. In an hour of improbable tales and darkly hilarious tunes, it’s weirdly moving to close on a moment of real sincerity. Alex MacKeith seems to having a dream run so far, selling out regularly; it’s likely he’ll be in a far bigger venue next year.