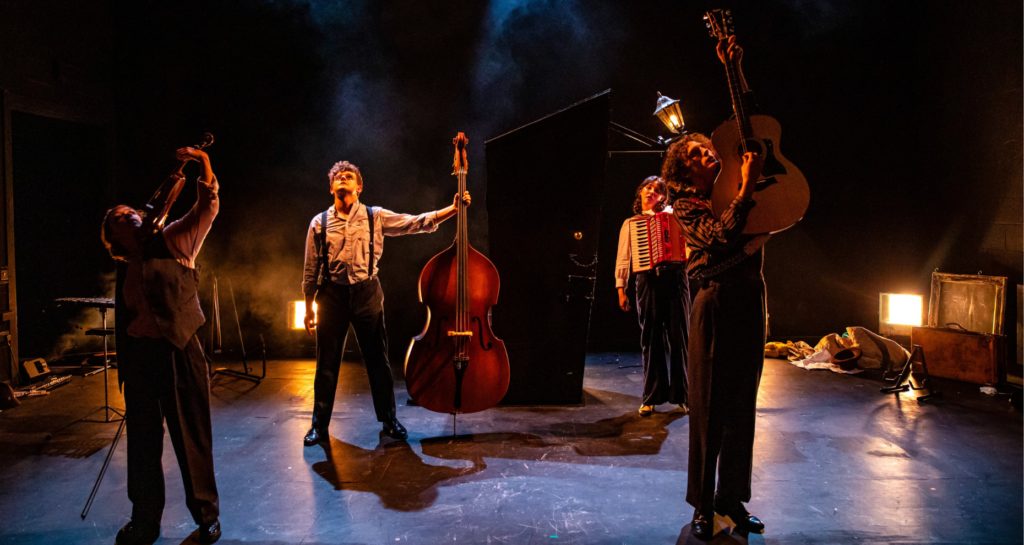 The murder scenes are especially unsettling

As the audience enter Underbelly Cowgate to see ChewBoy Productions’ performance of Caligari, a musical reimagining of the seminal 1920s horror film The Cabinet of Dr. Caligari, they are greeted by a tableau of musicians and the imposing cabinet sitting centre stage. As the lights drop the performers come to life, tuning up their instruments and bidding the audience to ‘come inside’ with their haunting melodies. It’s an unsettling introduction but one that fits perfectly with this charming adaptation of a legendary film.

Focusing predominantly on the victims of the titular Caligari, the five performers recite the story as they have done countless times before in the hopes that their story will live on, lest they be forgotten. It’s a lot of fun, with the cast poking fun at the original while also paying suitable homage. The production still manages to maintain some of the more horrific aspects through stark visuals – Cesare’s initial emergence from the cabinet and the murder scenes are especially unsettling thanks to the physical movements of the performers.

While the cast deliver solid performances throughout Caligari, it would be nothing without the music. The cast cavort around the stage wielding a wide variety of instruments including guitars, violins, and a double bass to name but a few, utilising them to great effect to craft a soundtrack fitting of the scene in hand, whether that be creating the mundanity of a clerk’s office or to add a trace of menace or romance to a scene. It all comes with a distinct European folk sound too, perhaps more akin to a cabaret than a horror show, but blends perfectly with the setting of Weimar Germany and the Expressionism at the heart of both the film and this show.

Perhaps it’s a symptom of retrospect, but ChewBoy also manages to tap into something prescient about the film and bring it to the forefront. Two pacifists in Weimar Germany murdered by a brain-washed individual on behalf of a leader hellbent on control, subjugation, and recreating past greatness now feels very much a prediction of the rise of Hitler. This echoes into a stark warning about our own society, with the five victims ultimately coming together and imploring the audience to release them from their cycle of violence lest we become subject to it ourselves. After all, they say that the definition of insanity is doing the same thing over and over, hoping it will change.