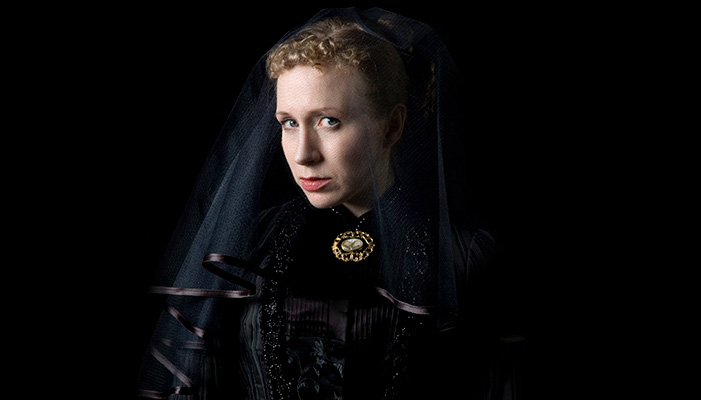 Writer and performer Rebecca Vaughan delivers a tour de force in Dyad Production’s Female Gothic. Every detail is honed to perfection: the thirty metres of gauze cascading behind her, the winged armchair, the Persian carpet. All elements serve to enhance the performance, like the candelabra with three candles with one snuffed out when each of the trio of tales is completed.

Vaughan is a physical actor, her body encapsulating the form she describes, from the chemist mixing drugs to the hands around the throat of the faithless lover. She is a subtle and accomplished mime. In addition, her rich deep voice paints a picture with words.

Female Gothic relies on Vaughan’s skill rather than gore to create its stories, stories which are vaguely familiar. Focusing on psychological terror – the rejected lover, rogue science, and hidden mysteries, they feed into well-recognised dreads. It’s the last story though, which Vaughan claims as her own experience, that proves the most horrifying though. No longer the narrator, Vaughan conveys her personal terror in the most realistic way possible. In response, the audience is forced to move back in their seats turning away from her description of something unspeakable which lurks in the cupboards.

Director Guy Masterson’s stage effects heighten the drama magnificently, with the play opening with a shadow thrown on the backcloth reminiscent of the menace created by the vampire’s dark outline in F. W. Murnau’s classic horror Nosferatu. We are teased by Waen Shepherd’s understated yet tense sound design. Costume Designer and maker Kate Flanagan deserves particular mention for the beautifully structured black dress.

These are three tales from the Victorian era which also resonate with modern anxieties. There is a strange comfort, almost like a recollection of childhood ghost stories, in being scared by such an accomplished artist. We are relieved when the show ends and the lights come up and we acknowledge that this was all make-believe, or was it?

Female Gothic is a delight and judging by the comments as we leave the auditorium Vaughan’s solo performances are building a dedicated fan base.