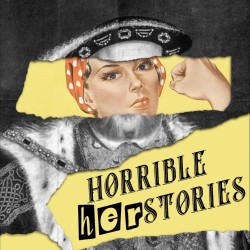 A fun and breezy sketch show about women in history

The sketches come thick and fast

From the building of Stonehenge, through the medieval period and up to the modern day TED talks, women have often been left out of history. Lost Pages Theatre Group seeks to rectify this and takes you through the forgotten herstory.

The cast is at their funniest when poking fun at the issues that women have faced throughout history, including ridiculous fashions that kill, scientific contributions ignored and dealing with menstruation. There are some excellent puns: Sigourney Weaver creating the Bayeux tapestry, anyone? Dad worthy jokes also abound, when one woman runs around the stage in the dark yelling numbers before declaring it the history of the Dark Ages. These have the audience laughing and groaning in equal measure.

The cast are young, enthusiastic, and are clearly having fun. This mood spills over to the audience and produces more laughs than some of the material would justify. Some of the sketches miss the mark and a surprising number don’t have anything to do with women in history. The sketches involving the male characters at an academic conference for misogynists don’t come across especially well, and felt a little mean-spirited.

However, the sketches come thick and fast and any jokes that miss are soon forgotten in this fast-paced show. Skewing the modern to the old, with a Victorian dating show where only the ankles are shown; to a shouty man commercial for womb compensation, the comparison to the hit TV show Horrible Histories is clear. It’s a winning formula that the cast use well for many of the best jokes in the show.

While some of the jokes and sketches are a little hit and miss, this is a fun, high energy look at some of the real and imagined women in history.