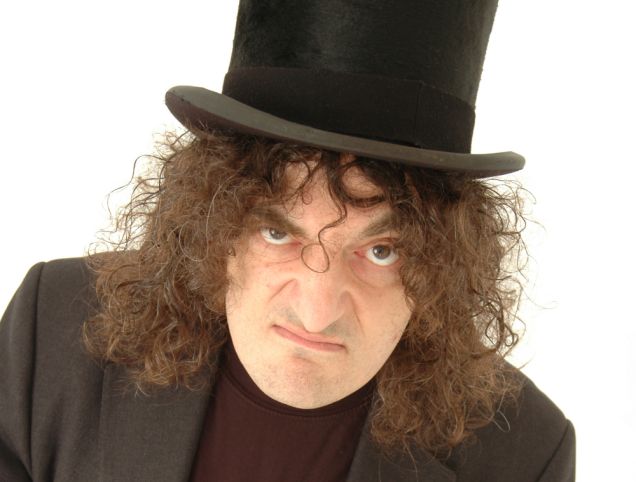 Jerry Sadowitz - Not For Anyone

Diabolical in service of deeper truths; the Fringe doesn't realise what it's missing

He's gone, grumbling into the night, leaving a cesspit of mental images in your head

In the end, in context, it’s hard to believe this was what all the Fringe fuss was about. Yes, phalluses are whipped from pants. Yes, he calls Rishi Sunak the p-word. But that’s the least of it. If you’re inclined to take Sadowitz at face value, you can take your pick of objectionable material. We get Jimmy Savile in action at his necrophilic worst, Schofield in flagrante at his homosexual best, a catalogue of Sadowitz’ own zoophilic fantasies. Accents are done. Bernard Manning gags are cracked. The memory of Madeleine McCann is taken in vain. This is what Sadowitz is. Plainly unwholesome, and clearly labelled as such. Strong meat, and absolutely no-one would blame you if you couldn’t stomach it, probably least of all Sadowitz himself.

But let’s be honest about what’s going on here. “Pale, stale male dunks on women and minorities” was the easy characterisation to make over the Fringe furore, but it is an arse-about-tit way of viewing his shows. With Sadowitz, there’s none of the “oh yes, I went there” smugness of Jimmy Carr or pre-Damascene Frankie Boyle. There’s none of the tedious attempts at winning the discourse that sour Gervais’s work. This show does not really care about any of that. It is distilled misanthropy and raw nihilism. It is not a policy statement, it is a performance, and it has been mistakenly dragged into a culture war it wants no part of. Notions of punching up and punching down do not apply; there’s no-one Sadowitz wants to punch more than himself.

To the extent that the aforementioned multi-millionaires have ripped Sadowitz off, as is sometimes claimed, they’ve diluted him. In their hands, an edgy gag has become about what is being said; in his, it is about how it is being said. Without the performance, of course it all sounds terrible; with it, it’s a different kettle of fish. The off colour gags that made Frankie Boyle famous were like trim, bite-sized chunks, spiced up and served to the audience on a plate; Sadowitz is more like a butcher at his slab, cleaving wildly at the carcass in front of him and hurling the cuts out into the audience. And, just like cheap, pre-processed supermarket meat is at the wrong end of the food spectrum, and organic, butchered-at-source cuts are the better end, so stands the cheap, clickbait-y shock gag you get from a Netflix special to the holistically bleak worldview Sadowitz presents.

The pace is what hits you first. He’s still a whirlwind of bile and it takes a few minutes to get up to speed with the gags. The breadth and depth of his anger means he mostly stays the right side of old-man-yells-at-cloud on specific topics, although there’s a dissection of the LGBTQIA alphabet which feels hackneyed.

There’s some Scot-specific bubble-bursting when he points out that, even with the continued Tory shitshow, we shouldn’t expect Sturgeon to ride to our rescue – she’s cut from the same cloth as every other politician. In fact, there’s speculation on the state of world politics that verges on conspiracy theory, but when stitched together into a rant that encompasses Trump, Corbyn, Putin and China, it crystallises into a lightbulb moment. Maybe we are being hoodwinked on all sides, except by the mad hatter in front of us? After all, this is the man who famously called it right about Savile, many decades before the world did. Is he onto something here as well?

After an hour of dense hatred, a rapid-fire magic set that others would build a career round is tossed off in ten minutes like it is nothing, before he tops the night off with some poems, including one for the recently departed Robbie Coltrane, in the guise of his Jewish bardic alter-ego, Rabbi Burns. And then he’s gone, grumbling into the night, leaving a cesspit of mental images in your head.

Now in his 60s, thoughts inevitably turn to legacy. “I haven’t really had a career,” he recently told the Guardian. “I hardly perform.” Will the Fringe controversy resolve into an extended swansong as an alternative national treasure or see him peter out into persona-non-grata obscurity? You’d hope for a couple of decades of the former; the entertainment world being the way it is, you wouldn’t bet against the latter. Sadowitz himself clearly anticipates that endpoint, which gives an unmanufacturable edge of despondency to the already dark humour.

Sadowitz is a jester in the ancient sense: predisposed – one might say doomed – to be poking fun at all and sundry in as uninhibited a manner possible and paying a large personal price for it. To dismiss him from court would be our loss.