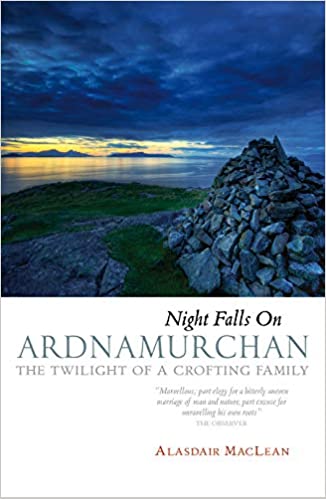 Personal account of the slow decline of a crofting family

Nature writing meets family saga in this tale of a crofting family in the west of Scotland. In the village of Sanna, where the author’s family owns a croft, a slowly declining population lives on, presenting a front against the march of modernization. Originally published in the 1980s, this book is the author’s attempt to rationalize his family’s choices, but also examine his relationship with them.

Ardnamurchan is located at the westernmost point on the Scottish mainland, as remote today as it was four decades ago. Beyond it lies the unforgiving Atlantic, choppy and in constant upheaval. Centuries on from the Highland Clearances, crofting communities still suffer from the lack of industry, people, and importance. They have slipped off the edge of public consciousness, as they teeter on the brink of survival. The author Alasdair Maclean extracts diary entries from his father’s journal, which bring to life the journey of a crofter, in the 1950s and 1970s.

There is a lot to unpack in this book in terms of the deep intimacy of man and the lands he occupies. The humdrum of livestock on the farm, comings, and goings of neighbours, and the occasional excitement of post. Through the first-hand accounts, we come face to face with the true nature of crofting, the relentless hard work, and the little reward. But the satisfaction of that generation from embracing their profession shines through.

Maclean struggles with the need to carry on the crofting identity against the attractions of modern life. Through his qualifications of his father’s journal entries, the reader begins to understand the pressures of expectation on the next generation. While Maclean builds his fortunes far away from home, and often travelling the world, he cannot help but return to Sanna, again and again. His reflections of the umbilical attachment to the place of his birth are bittersweet. And in his resolution, readers will find a small part of their own identity. A classic Scottish book to examine what home means to all of us, and what we are without it.