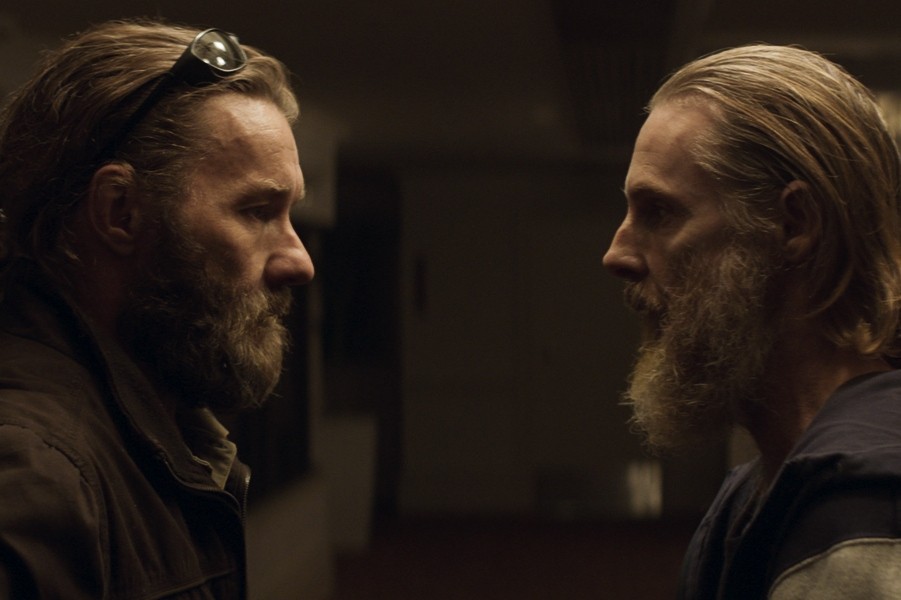 A dark and sinister walk alongside evil itself

If there’s one motif in the best of Australian cinema that rises up time and again, it’s a deep and solemn meditation on the land itself. As if the continent is something so large and imposing that any story set there can’t help but be oppressed by the bare stretches of her vast plains and the looming menace of her soaring heights. It’s in such a way that The Stranger imbeds itself, with an almost threatening opening shot of Mount Beerwah, set to a deep and sinister thrumming.

The experience of The Stranger is one which benefits from going in with as little knowledge as possible. With that proviso, the story follows Henry Peter Teague (Sean Harris), an awkward and quiet loner, who after a chance meeting with a stranger on a bus, finds himself thrust into the lower echelons of an Australian crime syndicate. Once there, he’s put in the care of the more open and charismatic Mark (Joel Edgerton) who acts as his contact, and slowly becomes his confidante and friend. As more and more time passes, it’s clear that the powers that be want to trust in Teague, but only if he can be honest with Mark about his past and any dark secrets he has. Only Mark has a secret of his own, he’s an uncover police operative, and part of a huge sting operation.

There’s another part to this film that follows Jada Alberts‘ police detective Kate Rylett during her investigation, but it’s in many ways the weaker part of the story. Both visually and tonally feels almost like a separate film, compared to the almost meditative sections that make the mainstay of Teague and Mark’s association, which feel like they are cut from the same feverish cinematic cloth as Peter Weir‘s Picnic at Hanging Rock. That said, the stark difference drawn between the moments of business-like police operation, and the tense web of lies and discomfort of the undercover work.

The weight of much of the film really rests on the shoulders of Edgerton and Harris. Their chalk and cheese pairing is both brilliant and tragic, as Edgerton’s gruff but likeable every man crook act, sits in broad contrast to Harris, who seems ill-fitted to his own body, and ethereally creepy. He’s like a feral animal, quiet and easily scared off, with a hint of the ghost-like, seeming as if a strong breeze might make him dissipate into the air like a terrible phantom. But both are incredible performances, especially considering that Harris is hard-boiled East Anglian stock, yet his Aussie accent is impeccable.

This is a film that takes its time, and allows the horror and tension to play out in ever increasing circles, as the fraying ends of Mark’s sanity start to lead him to have nightmarish visions of imagined moments where his cover breaks, or to see Teague in every shadow, and spook him at night, or while spending time with his young son. The overall feeling is the sense of taking a dark and sinister walk alongside evil itself. The repeated motif of the mountain, and Mark’s meditative and monotone relaxation mantra cut with the frantic editing choices, and the all encompassing land itself and its importance in the narrative really bed this in as a solid entry from an early-career writer-director, and a film that feels like a modern tip of the hat to the best days of the Australian New Wave.