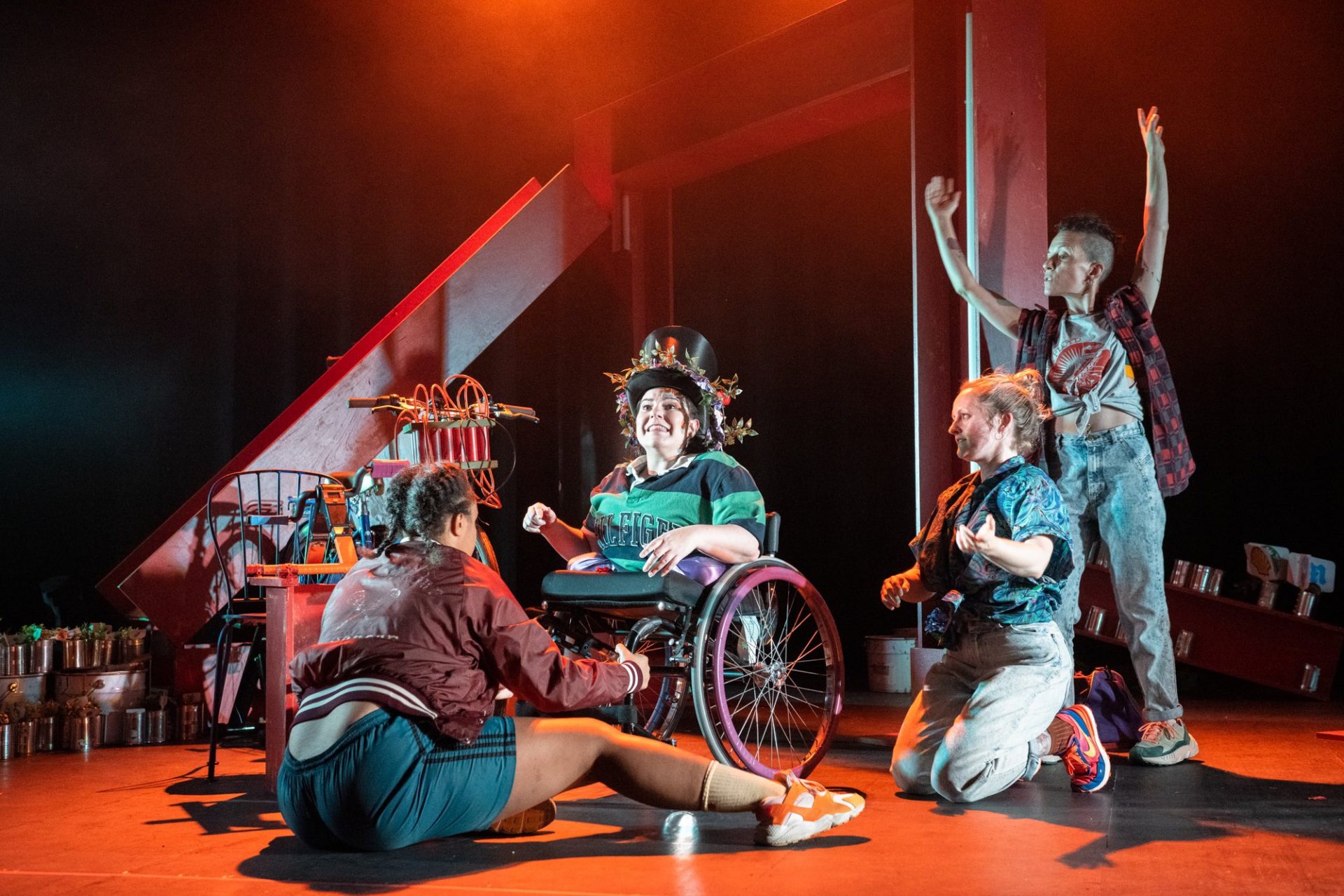 While H.G. Wells’ debut novella The Time Machine may be a seminal work of science fiction, certain themes feel undeniably outdated and problematic by today’s standards. Jordan & Skinner’s The Time Machine: A Radical Feminist Retelling hopes to reimagine the classic for the modern day, but unfortunately fails to do that in a compelling manner.

Four radical feminists find themselves preparing for the impending apocalypse – hiding out in a secret bunker, ruminating on their impending doom, and planning how to survive and thrive. Chiefly, they contemplate who will carry ‘the people’s baby’ and how they will raise them to be a better generation of humanity.

Meanwhile, Wells’ anonymous time traveller – played at different points by the four actors donning a top hat – arrives in the year 802,701. There, he discovers that humanity has branched into two different species – the docile Eloi and the carnivorous, subterranean Morlocks.

While there are vague parallels to be drawn between the two narratives, they don’t really mesh as well as one might hope. The opportunity to raise discussion and extrapolate new meaning is unfortunately wasted by grasping for the lowest hanging fruit that allows for vague allegory. The traveller’s realisation that the Morlocks are the devolved working class, toiling in the dark and eating the flesh of the aristocratic Eloi, roughly balances with a conversation about eating the rich. But what is meant to be extrapolated from this? Are the feminists the ancestors of the Morlocks? If so, what hope is there for the future of survival that is seemingly promised by the production’s end?

The cast do what they can through witty asides and fun montages, but they are unfortunately hampered by their material and awkward movement choreography. It also feels as though the cast are in competition with one another, rather than synchronising with an otherwise well-constructed soundscape, which in turn makes it difficult to hear them.

We’re clearly meant to root for the feminists trying to exist in a world that is increasingly against them, but they are inherently unlikable. There are awkward allusions to the sexual exploitation and assault of men, they bicker over trivial things, and their eventual fallout and reunion feels both rapid and unearned. Moreover, the fact that the main source of the drama revolves around semen feels at odds with the intended nature of the production.

There are some positives to be found within this play, though. Christine Ting-Huan Urquhart’s cluttered set is nicely utilised throughout the performance with beams and girders offering fun levels, even if they are concerningly wobbly. There is also an active attempt to include BSL interpreter Yvonne Waddell into the performance, which makes for a refreshing change even if her inclusion is somewhat inconsistent.

Unfortunately, while Jordan & Skinner promise a radical, feminist retelling of The Time Machine, this production feels anything but – which is a shame considering the potential on offer.