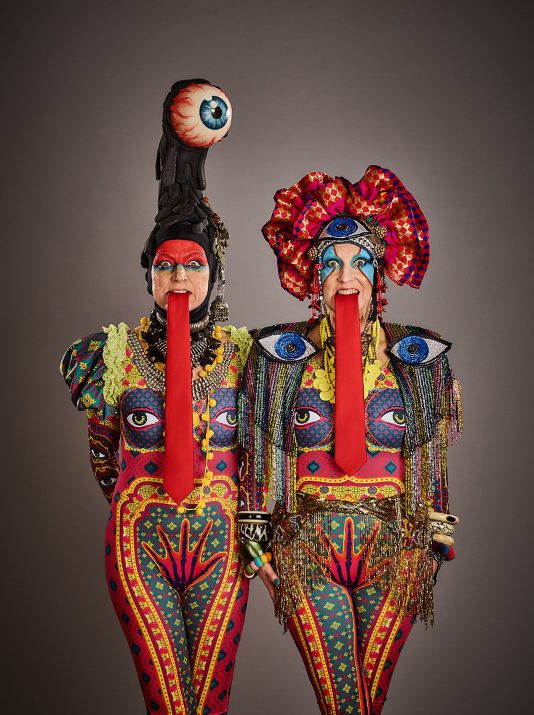 Previously appearing at the Edinburgh Fringe in 2019, Witch Hunt from A&E Comedy proclaims to weave a cautionary tale for our time. The show’s appearance at the Traverse represents the final stop on its UK tour and, unfortunately, the performance goes out with more of a whimper than a bang.

Stepping out from behind the folding book standing centre-stage, Abigail Dooley and Emma Edwards look very much the caricature of fairy-tale witches – complete with fake teeth, cloaks, and skeletal hands. They welcome the audience and promise a retelling of fairy tales through magic, puppetry, and comedy.

These supposed retellings, however, prove to be sketches that are mostly unrelated save for the occasional throwback and the overall presence of witches. During these they make reference to the patriarchal norms at play and the vilification of women. There is a loose overarching narrative at play throughout, mostly told through the barbs and asides that the performers throw at one another, but it all feels very secondary.

This is ultimately the problem with Witch Hunt: any attempt at meaningfulness when raising issues of female disempowerment and male entitlement is quickly cast aside to make way for more mediocre comedy. While the audience certainly laps it up for the most part, humour is highly subjective. In this case, it relies on you finding a wolfish prince with furry testicles making crass pick-up lines and thrusting at the audience members funny.

Eventually the show culminates in a half-hearted attempt at a rallying cry for female unity in a world that has historically vilified them and continues to do so, but when it immediately leads into a sing-a-long of David Bowie’s Changes, the lustre is lost. There is perhaps something to be said about the reclamation of vulgarity and the female body, especially through the presentation of a partially nude older woman – though the fact it’s used for a shock laugh cheapens things somewhat.

Despite proclaiming to be a new show, this rendition of Witch Hunt very much re-treads the same territory as its 2019 counterpart. That’s not necessarily a bad thing, as Dooley and Edwards have had time to refine their mannerisms and physical comedy, ensuring they are able to play off each other well. It’s just simply not what is being advertised.

The only additions are a final quick-change trick and an updating of jokes to incorporate more recent events, including COVID-19 and the war in Ukraine. Add in some skits that feel painfully dragged out to pad the show and mask costume changes, and the whole thing feels like little more than a Fringe show playing to a larger audience.

Once the show ends, Dooley and Edwards lament that their two nights at the Traverse may be the final ones for Witch Hunt, but honestly that may be for the best.